In our last post, we discussed Moving Averages, the second on our list of trend technical indicators. You learned about their different types: Simple, Exponential, Smoothed, and Linear Smoothed. I hope that you were impressed by the different ways in which the technical indicator can be used.

In this post, we will be discussing Bollinger Bands. Developed by the American financial analyst, John A. Bollinger, and named after him, Bollinger Bands are a technical indicator consisting of two bands plotted in relation to the simple moving average of price. They have been effectively applied to a wide range of financial markets, from stocks to Forex.

Bollinger Bands can help you identify when the market is either overbought or oversold, all by gauging market volatility. Here, you will learn how to identify in an increased number of trading opportunities for yourself, all just by learning how to use them correctly. So, read on.

Bollinger Bands
Exactly as named, Bollinger Bands are made up of two bands, known in some texts as ”price envelopes,” which define the range of upper and lower levels of price. These bands are plotted two standard deviations (positively and negatively) away from the simple moving average of the price of a financial asset (e.g., whether stock, option, commodity or Forex pair). 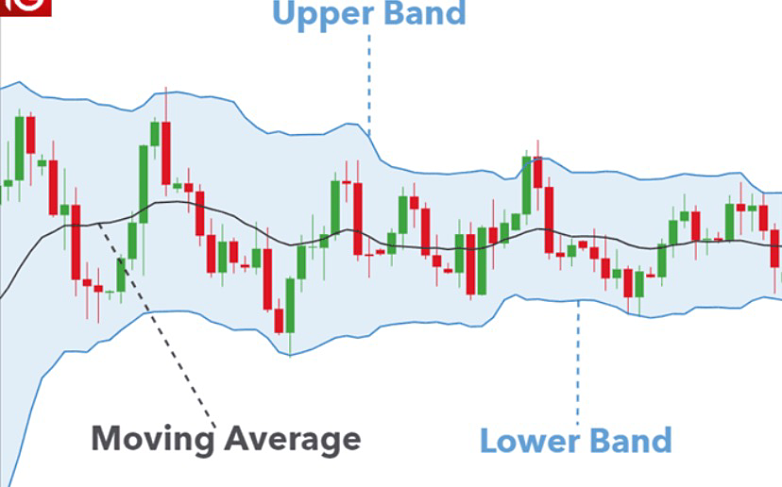 As a result, Bollinger Bands are structurally made up of three lines: the upper band, the middle line representing a simple moving average, and the lower band. These upper and lower bands, which are often plotted two standard deviations from the middle band, a 20-day simple moving average, can be adjusted. Hence, any trader can customise Bollinger Bands for their needs.

Even if you are not mathematically inclined, Bollinger Bands are not difficult to calculate. To do so, first, you just need to compute the simple moving average (SMA) of the asset being traded for a given amount of time, usually 20 days. The function of this SMA, as with all moving averages, is to smooth out the fluctuations in the closing prices of those periods. However, you can choose to extend the data point beyond the 20 days.

The next step is to obtain the standard deviation of the price of the asset you are trading. After multiplying the standard deviation by two, the result is then both added and subtracted from each point along the SMA. This is to produce the upper and lower bands. The SMA is like the reference point to which the prices in the data point are compared.

How to Use Bollinger Bands
Bollinger Bands are based on a concept known as volatility channel. Their upper and lower bands are plotted against the central measure of price and move in relation to it. While the upper band represents a level of highness (i.e., resistance), the lower band, on the other hand, indicates a level of lowness of price (i.e., support).

Widening Bollinger Bands indicate increasing volatility. However, when they are narrowing, the volatility is decreasing ©️IG. 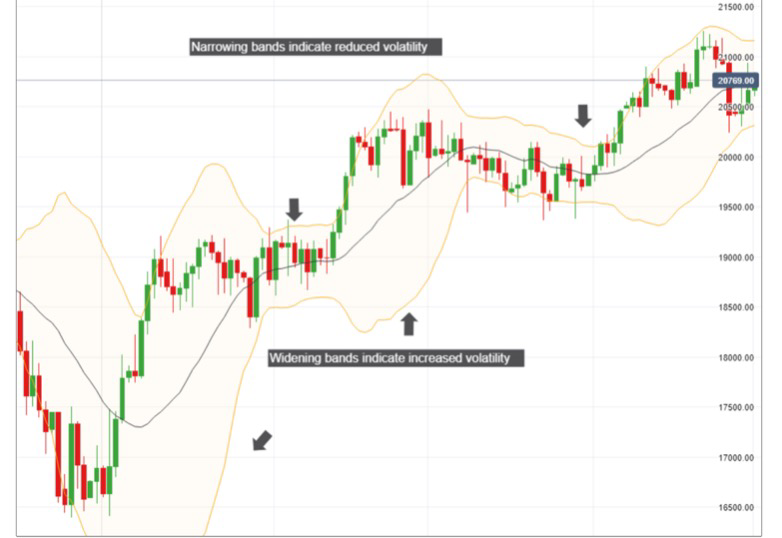 Many strategies have been built around this behaviour of Bollinger Bands. However, all of them have one feature in common: it is the action of the price as it nears the edges of the upper and lower bands that determines the exact kind of action to take. The action of price within these regions determines whether or not it is too relatively high or too relatively low.

For example, when the price of a particular currency pair is trading in the upper band, this can indicate that the market has reached resistance. Similarly, when it is trading near the lower one, the market may be bottoming out. That is, the market is hitting a level of support. Identifying those levels will guide you to the exact kind of action to take.

In using Bollinger Bands, there are some useful tips. First, use the default settings for the indicator. That is, set the period and standard deviation to 20 and 2, respectively. This, apart from being the easiest, also saves you a lot of time. One strategy that could be used it to use the bands to identify strong trends then buy when the market pullbacks to the SMA.

Another strategy is to buy the test of the lower band and to sell the test of the upper band. However, it would always help to confirm the signals presented by the Bollinger Bands using other technical indicators (e.g., most importantly, Fibonacci Retracement Levels) before you buy or sell.

Finally, because of their unique characteristics, Bollinger Bands can also be applied for the discovery of trend continuations and reversals, possible market tops, bottoms, and volatility breakouts, and consolidating market conditions. For any of these, all you need to watch out for is the degree of expansion and contraction of the bands.

Conclusion
Bollinger Bands are an effective technical indicator for discovering trends and riding on them. With them, you can also identify breakouts. Perhaps, the most significant advantage of Bollinger Bands is their ease of use: they do not require any complicated calculations. Instead, when you use them, they allow you to quickly know both the direction and strength of trends through just a glance at the chart.

This post has offered the basics about them. Although Bollinger Bands can be used alone, empirical evidence has shown that better trading signals are confirmed when they are used with other indicators. However, if you are a trader that does not have the time and patience to devote to analysing the market yourself, then you should subscribe for our Forex trading signals here.